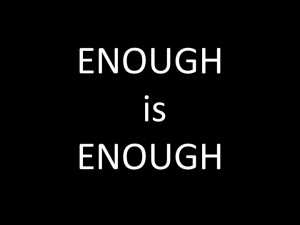 It all started in a steaming rage!

The other day my morning walk started in a steaming rage.  It was a cold Melbourne day and my breath created small puffs of fog as I walked.  I had a moment of lightness as I recognised it really did look like I was steaming with rage!

For about the first 30 minutes of my walk I went from being totally consumed by my negativity to swings of ‘witnessing’ my negative self-talk and subconscious programming.  From this witnessing place I could see myself battling no one else but me.  Don’t get me wrong, I did want to go up to a few significant people in my life and shake them that’s for sure, and perhaps awaken to a new way of seeing the world, but primarily I was at that very moment only battling myself.

I had had one of those moments when you see things crystal clear and recognised in that second that ‘enough is enough!’  I’m sure you all know those tipping points!

I was listening to a conversation between two individuals (my children). This exchange ultimately left them with the idea that they were ‘not good enough’, and they did this to each other!  Stop, enough already!

It happens all the time.  Sadly we receive this information from so many different sources, that we take it on as a core belief and this subconscious programing then gets to play out in all aspects of our life:

Ok, after about 30mins of the steaming rage walking, I allowed myself to slow down and breathe a little deeper, look at the trees and moving water.  It was in this transition that my light blub moment landed.

I recognise that people often tell these things to each other (directly or indirectly) out of FEAR.  Most of you will say, yeah of course …. One puts another down to make oneself feel bigger, thus supposedly reducing them as a risk and thus reducing the fear.

However, let’s take a deeper look.  What about when people tell those they LOVE that they are ‘not good enough’ out of fear.  What then?  From my light bulb moment, I now recognise that those judgments are often shared from a place of fear of how society will JUDGE the ones they LOVE.

A father tells his daughter she’s not thin enough BUT if she changes, she won’t get ridiculed by her peers.
A mother tells her son he’s not smart enough BUT if he changes, he won’t end up in a dead-end job and judged as a looser.
Siblings often share ‘not good enough’ judgments with each other in the hope they may create change in the other, reducing their potential to be impacted by the big wide world!

It’s an interesting idea don’t you think? ….. I need to wound you a little so you get the message and hopefully, you won’t get wounded by society as a whole.  A good strategy on some level I’m sure.

The problem is however, that our sub-conscious mind takes that information on as ‘truth’ which then gets to play out for the rest of our lives.  Remember, in our formative years our subconscious mind doesn’t have a ‘gatekeeper’ saying “That’s a helpful belief, let’s take that one”.  “No, bad idea, reject that.”  It all goes in, especially at a young age.  It’s not until later in life that our conscious mind begins to play a role making conscious choices about taking things on or not.  So those unhelpful early programs get to go on and impact us as life unfolds. You’re fat,  you’re stupid,  you’re sickly. Yuck!

And I am not talking about  ‘just enough’ that you’ll get through.  No, this is stronger and deeper! ….. You Are Enough …. You are able to achieve anything and everything your heart desires because you are absolutely, 100% enough!