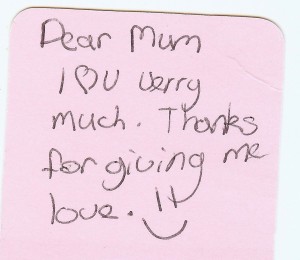 THE HEALING POWER OF FORGIVENESS

A number of years ago my daughter wrote me a note, it read:

Dear Mum,
I love U verry much.
Thanks for giving me love.

She gave me this note while we were travelling in the car together, and that is where it has stayed, proudly displayed on my dashboard.  There was no major story leading up to the beautiful note, she was simply sharing her love with me.  The note has however become quite a talking point.  People travelling in the car with me often ask about it.  Sometimes the person will read it as though I was forgiving her for something:

Thanks for giving me
Thanks forgiving me

It is an interesting reminder though.…. How does the act of forgiving work?

When I work with clients regarding forgiveness, it is either that they need to forgive another person or themselves for something that has caused them pain.  There have been many books written on forgiveness and many tools are suggested to support this work, but ultimately it comes down to one decision …. a choice to let it go.

This step does not require that you condone the behavior, it can be a step of witnessing the situation and seeing the many layers and interplays occurring:

It is the ultimate step of surrender and love, finding compassion for another or oneself, and choosing to be at peace with it.

Often times when we delve into forgiveness we can allow our intuition to guide us.  Recently, I worked with a client named Mary regarding self-forgiveness. Mary recognised the need to be empowered in her own choices and listen to her gut instincts rather than be misguided by others.  She needed to forgive herself for not trusting her own guidance.  At that point she suddenly saw herself as an old diseased woman, an image that she most definitely wanted to step away from.

There are many healing beliefs/traditions and new research studies linking emotions and body illness, so Mary’s image of an old diseased woman that wasn’t forgiving was spot on for her!  It inspired the shift towards forgiveness.

A shift in her spiritual life (intuitive guidance)
Created a shift in her mental perception (forgive myself) ….
Resulted in changes to her emotional state

If you don’t forgive now, WHEN?  Do you want to hold on to the pain and take it to the grave, or let it go NOW? Create peace for yourself and enjoy a full life going forward.

I heard John Demartini (human behavioral specialist) speak of his time working with a group of Jewish holocaust victims.  While working with the group, John pointed out that while Hitler caused huge trauma to them in the past, they were still allowing Hitler to run their life, through them holding onto their pain.  This must have been an amazing group of survivors, because they worked with John to eventually recognise that there were some actual gifts in this experience.  By recognising the balance of both struggle and support, they were able to heal and move forward.

A shift in their mental perception….
Resulted in changes to their emotional state

Are you holding onto pains that still run your life?

I had an amazing conversation with a woman from Adelaide a number of months ago.   Minetta called to discuss the concept of healing, how it  occurs and why it happens for some and not for others.  During our conversation Minetta shared her strong belief in the power of prayer and her own need for forgiveness in order to healing.  This is Minetta’s story:

In 1998 I had surgery for a large lump on my liver.  The lump was capsulated but the pathology revealed secondary Liver Cancer and they didn’t know where the primary cancer was.  I was told to go home and get my affairs in order plus Palliative Care was discussed.  Life expectancy was 3-4 months. I wasn’t ready to die and was in denial as to the severity of the situation.  I kept saying to myself, “what are these stupid people talking about, I am not dying”, but just to make sure I decided to pray to God and ask for healing and forgiveness.

When I asked God for forgiveness a voice in my head said “if you expect me to forgive you, you need to forgive those who have hurt you.”  I had such a strong desire for healing I said “OK God, I can do that”.  So I forgave all the people in my life that I could think of.  I said to God “I have forgiven everyone” and the voice said “no you haven’t” then all these faces appeared in my mind of people who had hurt me in the past that I had pushed to the back of my mind.  God brought them to my attention.  I forgave them as well.  Once I did that an amazing feeling of peace flowed over me.

I must admit I was a bit of a doubting Thomas as to my healing so I went to a naturopath for an assessment.  She took a sample of my blood and showed me a picture of healthy blood and blood of a person suffering from cancer.  She looked at my results and said “are you sure that you have had cancer because your blood result is normal”.  I knew for sure then that God had healed me and that forgiveness had been a big part of that healing.

Now whenever someone hurts me, I forgive and move on with my life so I can retain this beautiful feeling of peace.

Minetta’s story shows the amazing link between belief, forgiveness and spontaneous self-healing.  I love this story as it reminds us of the healing potential of the body.

A shift in her spiritual life,
Inspired a desire to create forgiveness (changed her mental perception)….
Resulted in changes to her emotional, energetic and biochemical/physical nature
…. Her body healed

This absolutely blows my mind, we are amazing beyond our understanding.

We are holistic beings, and shifts in our mental, emotional, energetic, physical or spiritual nature have the power to heal.  Forgiveness is a mental and emotional choice, which shifts our energy and frees us to get the most out of life once again.  This is what I like to call creating Authentic Balance.

Thank you to Mary and Minetta for allowing me to share their inspirational stories.

And, finally, I have a question for you ….. Is there anyone you need to forgive?

Ref : John Demartini Audio “How to leave a 1000 year legacy with your life”.